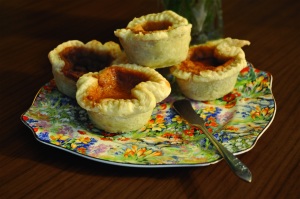 Tarts from The Bakery in Gravenhurst: among Muskoka's best.

We would add another division: those who like their tarts runny and those who like them firm. With those two distinctions a clever behavioural scientist could build a career, using venn diagrams and polynomial graphing to build a tart personality profile. Do fans of runny with nuts have a higher appetite for risk-taking? Perhaps raisins correspond to highly social behaviour, or firm tarts equate with tradition and predictability.

Regardless of the outcome, there are few better places than Muskoka to conduct this research. Surely we enjoy the highest density of butter tart makers in the country, with legions of fans ready to support each baker’s claim to be the best. Anyone who wants to serve butter tarts in this area had better bring their A game: doughy pastry, subdued flavour or uneven texture just won’t cut it around here.

This summer, we at Muskoka Life want to find the very best butter tarts around. Food writer Pamela Steel will be wading deep into the sticky world of tartdom in August, discussing techniques and ingredients with some of the top tart-makers around. If you’ve got a tart you’d like to nominate – your own, or someone else’s – click on the Butter Tarts tab above.

In the meantime, here is a short, incomplete, and highly biased list of some of the finest tarts we’ve found so far. Let the tasting and debates begin!

Marty’s World Famous, Bracebridge. Self-proclaimed world-famous baker of world-famous tarts, Marty uses a century-old pastry recipe and custom tart pans. The results are massive and so runny they’re sold with a warning label not to eat them while driving.

Rosseau Bakery. A family recipe draws fans to this small shop every week, where hundreds of tarts fly off the shelves as soon as they’re cool enough to pack.

Barlochan Hills Country Store, Walker’s Point. The shop’s a little out-of-the-way, but fans know its worth the detour for baked goods that include Scottish treats and butter tarts made with maple syrup.

Your friend’s mom. Or aunt. Or cousin. If you don’t have a friend who bakes superb tarts, find one. Ask around. They may even share the recipe, but chances are you won’t be able to duplicate them: tarts are finicky creations, and what works in one kitchen doesn’t always work in another.

4 thoughts on “Are you a runny, nutty person?”